Service Rating
98%
523 reviews
certificate-default
OVERVIEWAUTHENTICITYDELIVERYPACKAGING & FRAMINGREVIEWS
OVERVIEW
This Manchester United shirt was personally signed by Teddy Sheringham and Ole Gunnar Solskjaer. Teddy signed in Arundel on May 20, 2018 while Ole added his signature in Edinburgh on August 9, 2018. The strikers were responsible for United's thrilling Champions League victory over Bayern Munich on Wednesday, May 26, 1999. The Germans were leading 1-0 in injury time before goals from Sheringham and then Solskjaer produced an amazing turnaround. United finished 2-1 winners to complete an unprecedented treble of Premiership, FA Cup and Champions League.
AUTHENTICITY

All our signed memorabilia is supplied with a Certificate of Authenticity. It features a numbered hologram that matches an identical hologram affixed to your product, and details of when and where the product was signed. Our company number and details are included on the certificate.

Signing photo
Your certificate will include a photo of the sportsperson or celebrity signing one of the product line at the relevant signing session. For logistical reasons it is impossible to photograph every product being signed, but showing that the sportsperson or celebrity was present and signing items is, we believe, the best way to demonstrate the legitimacy of your products.

Numbered security hologram
Your certificate will come with a numbered security hologram, which will correspond to a matching, identically numbered hologram on your product. This ensures that the certificate can only be used to authenticate the item for which there is a corresponding number. If anyone attempts to remove either hologram it will destruct, so it is impossible to transfer the holograms to other items.

These are our standard delivery procedures. If you require your purchase urgently or want to know when your order will arrive then please contact us and we will do our utmost to help.

UK delivery of unframed items
We aim to dispatch all orders made before 12pm for delivery the following day, not including Saturdays and Sundays. Orders placed after 12pm are likely to take a day longer. Unframed items to UK destinations are sent via DHL. The cost of delivery will be shown during the checkout process. A signature is required upon receipt. If you are not in when a delivery is attempted, the parcel will be taken to your nearest postal sorting depot and a card will be left with instructions on how to retrieve it.

International delivery of unframed items
We aim to dispatch all orders within 48 hours, not including Saturdays and Sundays. All international unframed items are dispatched using DHL Express. Delivery time varies from 2-3 days for Ireland and the United States to 8-10 days for the Falkland Islands. Fees are calculated and displayed during the checkout process dependent on size, weight and destination. We are not responsible for any customs duties, taxes or levies on international orders. We do not expect there to be any additional charges for international orders but we recommend that you check with your local customs officials or post office for further information. A signature is required upon receipt.

As standard, your shirt will come in our smart vinyl packaging. However, you can choose to have it delivered in a presentation gift box, which not only looks great but can be used to store the shirt in the future.

You might want to make your signed shirt look even more special by framing it, in which case you should consider our specialist framing service. Deluxe framing is offered in a black frame with either a gold or silver inlay with two photos of the sports star in action, plus a plaque stating who has signed the item.

After your purchase the item is sent straight to our framers where it is expertly mounted and framed to create a striking presentation. It will then be sent direct to you by the framers using a secure, trackable method of delivery. Most items are framed to order so please allow an extra 10 working days for delivery of framed items. Please contact us if you need your purchase by a certain date.

We also stock a large number of preframed items (see preframed sports memorabilia) so if you are in a hurry then this is the place to look. 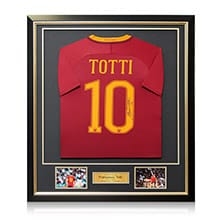 No reviews for this product yet, but read our service reviews here.